On Sept. 30, two Norwood fighters bid farewell to the Nahatan St. firehouse and began a new journey. Captain Mark Boyland and firefighter Steve Lydon, both retired with a combined 78 years of experience, hung up their gear for the last time.
Boyland joined the squad on July 29, 1979 and retired after 41 years. He earned a reputation early in his career as a young firefighter who took his job very seriously. In Sept., 1988, he was promoted to Lieutenant and assigned to the first due engine. As his leadership skills grew, he was again promoted to the rank of Captain on July 22, 1993, and served as the Group 3 shift commander for the majority of his remaining 27 years of service.
Boyland shared his vast experience by mentoring and teaching new firefighters and his group was well known for its preparedness and extensive knowledge. His group was described as a ‘well-oiled machine’ at fires and other incidents which is credited to Boyland’s professionalism and dedication to the job and the crew. It was common during his shift for others to encounter a spotless building, clean apparatus and training all complete before noon!
Lydon retired with over 37 years of service of tirelessly serving the residents of Norwood. He was hired on June 20, 1983, and was assigned on many groups throughout this career but the majority of his later years were spent on Group 3. As is common, Lydon rotated through the apparatus for almost four decades, but earned a reputation as an exceptional ladderman and was most often driving the ladder truck or rode shotgun in the front seat.
Many firefighters enhance their positions working in the trades, however, many new hires recognize the amount of medical calls and have often attended college or paramedic school prior to joining the station. This trend has led to a sharp decrease in the critical knowledge of building construction, plumbing, and electrical backgrounds of firefighters. As a licensed contractor and owner of a construction company, Lydon’s role and expertise at the station was a large asset and invaluable benefit to the department. Firefighters that worked under Lydon had a tremendous advantage as he schooled and coached his team on roof safety and how to properly overhaul a building to chase fire extension. Lydon’s knowledge of building construction and utilities and his commanding presence at fire or incident scenes will be sorely missed.
The Town of Norwood was fortunate to have such dedicated and experienced firefighters who tirelessly risked their lives every day for the safety of its residents. Captain Boyland and Firefighter Lydon, for the residents of Norwood, we are filled with gratitude and heartful thanks, and wish you a safe, happy, healthy, and well deserved retirement! 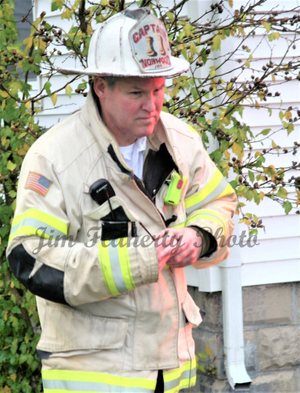 10:00am · No venue was assigned to this event.
View All Add Your Event