By Bella Caggiano
Just six weeks to plan a grand parade; not enough time you say? Plenty of time for Norwood’s A team! Yes, Norwood’s grand Independence Day Parade will take place this year, with just a few slight changes. First, the event will be held on July 3rd instead of its traditional date on the 4th of July. Also, the parade will begin at 10 a.m., and the Firecracker 5K Road Race will have a starting gun of 9 a.m.
“It was touch with the late notice and competing with other towns [to confirm entertainers],” Norwood Recreation Assistant Director Catherine Seastedt said. “Also, with 4th of July on a Sunday, there are churches on the route and we wanted to make sure we didn’t conflict with that.” 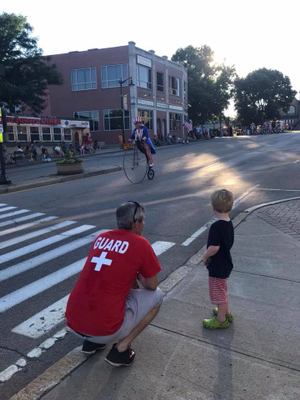 The Grand Marshal in the parade this year will be the Cooper family, in honor of the Town’s beloved Assistant Town Manager, Bernie Cooper.
“We felt it was important as we want to keep this tradition going,” Norwood 4th of July committee member Maria Henry said. “I think it is a huge benefit to the town, especially after the pandemic. Especially after losing Bernie; he loved this parade. He would have been honored we were carrying it on. This is what makes Norwood Norwood.”
This year’s parade theme is Hometown Heroes. There will be a float designated to many of Norwood’s local unsung superstars who worked hard throughout the pandemic to ensure residents’ safety and health, and who provided services throughout the difficult year. Representatives will include a doctor, nurse, postal worker, teacher, grocery store worker, and others. 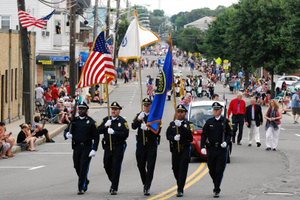 “We want to recognize them for all their hard work during the pandemic,” Seastedt said.
The Children’s Bicycle, Tricycle, Doll Carriage, and Historic Character parade this year will be incorporated within the main parade just after the fire trucks. Any child who wants to participate should be at the First Congregational Church, 100 Winter St., at 9:45 a.m.
What will remain the same is the parade’s route. It will begin at the Coakley Middle School, down Washington Street, all the way to the Town Hall.
Due to time and scheduling constraints, the parade may be slightly smaller this year, however, with the hard work of the 4th of July committee and assistance from the Norwood Recreation Department, it will still be one of the hottest tickets in the area. At press time, six bands were confirmed, a hip hop dance group, a horse troop, fire and police vehicles, antique and military cars, and of course, Norwood’s staple, the Colonial Boys!
“The parade is a little smaller because the bands have not been able to practice because of Covid or not traveling,” Seastedt said. “They are also staying close to home. They said they definitely want to be in our parade next year.”
The Norwood Firecracker 5K Road Race, however, is already slated to host more runners than previous years. With spectators lining the streets for the race and the parade, their cheers and encouragement marks this a 5K event like no other! The fee is $30 and participants can register the day of the event.
On Sunday, July 4th, there will be a reading of Frederick Douglass’ July 5th, 1852 speech, at 2 p.m., at the Old Parish Cemetery, at the grave site of abolitionist and Unitarian minister Rev. Edwin Thompson. This event is sponsored by the Old parish preservation Volunteers (OPPV) and Progress Norwood. The event is free and open to the public.
Gratitude and thanks should be given to Norwood’s 4th of July committee. Without them, this grand event, which draws thousands of enthusiastic spectators to Norwood, would not be possible: Maria Henry, Mary Cantarow, Martha Colamaria, Jim Henry, Lou Harris, and Travis Farley and Catherine Seastedt, both of the Norwood Recreation Department. And of course, a heartfelt thank you to Bernie Cooper who had given up so much of his time and heart to bring pleasure to Norwood residents and surrounding communities for so many years.
“We plan on honoring Bernie next year at the 150th anniversary,” Henry said. “Bernie is the face of this town. I don’t know if anyone realizes all the fun stuff was because of Bernie. We really want to honor him. Next year so we can honor him the way we should.
The 4th of July committee is still looking for volunteers the day of the event. For more information, call the Norwood Recreation Department at 781-762-0466. This is a great opportunity to share in what makes this event, and Norwood, the place where everyone wants to live!