By Liz Hughes
If you’ve been down to the Town Common lately, you may have noticed the addition of two new wheelchair-accessible picnic tables to be used and enjoyed by those who need them. These serviceable resources were part of Eagle Scout Daniel Sorensen’s give back to the community. 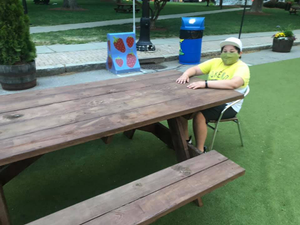 Sorensen, an 11th grader at Norwood High School, spent much of his adolescence and childhood with the Boy Scouts, starting as a Cub Scout, then taking a break before becoming a Webelo, and eventually stepping up and crossing over to Boy Scouts at age of 11.

“It’s definitely shaped my childhood very much and I’ve done it a long time and I enjoyed it,” Sorensen said.
Today, he’s a member of Troop 42 in Norwood.
What really pushed Sorensen to work toward Eagle Scout was his upcoming move to Denmark this summer.
“I’m probably going to be done with scouting in America,” Sorensen said. “Why not end my scouting career in America by getting that rank and knowing that I at least achieved something very few scouts achieve.”
Eagle Scout is the highest advancement rank in the Boy Scouts of America program. Less than 10% of scouts reach the rank of Eagle Scout.
Sorensen developed the idea for the wheelchair-accessible picnic tables when he was working on his Eagle Project and researching the best way he could serve his community. That brought him to the Town Common and he started to think of ways to improve it.
“We have so many tables during the spring and summertime when we expand the commons,” Sorensen said. “Why not make wheelchair accessible tables to give people with handicaps the ability to enjoy the town common as well.”
From there, things took off. He reached out to Town Manager Tony Mazzucco and DPW Director Mark Ryan who helped with moving the project forward, as well as with sourcing materials for the project.
“He (Sorensen) had an idea for an Eagle Scout project to build handicap accessible picnic tables which was a wonderful idea,” Ryan said. “Actually, he had three different ideas of designs and Daniel and I agreed on the one he eventually built.”
The town even helped out with securing the materials as well as helping cover some of the costs. Sorensen sold fabric face masks for $5 each to raise funds toward the project bringing in about $400.
Ryan said they helped Sorensen with the pricing of materials and costs, then they ended up splitting the cost of the project with him.
“The DPW picked up part of it and those monies raised went to the Norwood Fund to help families in Norwood in need,” Ryan said. “It was a win-win for everyone. He built something people can use that need handicap access plus he raised funds for the Norwood fund.”
Once the project was approved, Ryan said they arranged to pick up the materials and deliver them to his house to be built, as well as giving him the same stain used on other tables downtown so they look similar.
Sorensen got help from his local Boy Scout Troop with building, painting, and sealing the tables. When they were finished, DPW employees picked the tables up and helped get them installed on the Town Common. They also put placards on the tables to let visitors know they are handicapped accessible.
The whole project from idea to fruition came about rather quickly. Sorensen said he began talking with town officials in February and the tables were on the common by May 26.
“Now there are two wheelchair-accessible tables at the Norwood Town Common that are open and ready to be used,” Sorensen said.” Just come on down to the Town Common and enjoy the environment, enjoy the food, and enjoy the community.”