By Christopher Tremblay
Norwood girl’s lacrosse tri-captains Caroline Davey, Maggie Curran, and Molly Mannering were lucky enough to play in their senior season for the Mustangs this spring after the previous year was cancelled due to Covid-19. While the seniors are looking to go out on top, they know that the team is in very good hands.
Mike Lodge had inherited the team from Chuck Allen, and although he didn’t know all that much about the sport when his daughter first got involved some six years ago, he did familiarize himself with the game by watching older girls play so he could understand the game better. He was also coached on the game and was the Norwood Youth Lacrosse President. Now he’s coaching the high school team.
In addition to having a new Coach on the sidelines, Norwood also has a very talented team on the field. Two freshmen, who also play club lacrosse for Mass Elite, have helped the Mustangs improve their game, and with the seniors moving on after the season is complete, look primed and ready to take control of the Mustang reigns.
Olivia Naughton and Olivia Lodge, or the two O’s as they are referred to, have been playing lacrosse together since the third grade, and by the time they got to middle school they had joined Mass Elite. 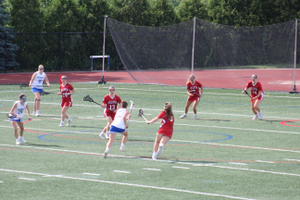 “This team has only three club lacrosse players on it (the two Olivia’s as well as Davey), the rest of the team is made up of a bunch of athletes that pick up their sticks in March and then put them down in June,” the Coach said. “It’s not to say they are not good; they just don’t have the talent and knowledge that the three club players have.”

The club players play the sport year-round and are continuously attending camps and clinics to make themselves better. Their counterparts play other sports throughout the year.
“This team is very athletic with each girl playing at least one other sport in addition to lacrosse,” Naughton said. “They may not be fulltime lacrosse players like we are, but they are able to use their knowledge and skills from their specific sport to make adjustments on the field that help the team.”
Prior to the regular season getting underway, Davey and the other captains saw the skill that Naughton and Lodge portrayed while on the field and knew that they were best suited to take over the transition.
“This team had a lot of building to do, but with the addition of the two Olivia’s club experience we knew that we could rely on them to help move this team forward after we leave,” Davey said. “By playing club lacrosse it allows them to have a better insight on the game while on the field. They are the perfect choice to lead this team.”
Although Naughton and Lodge were looked at as the successors to the Norwood lacrosse program, they knew that as freshman it wasn’t going to be easy for them.
“I am a shy person and didn’t feel comfortable saying anything to the older girls,” Naughton said. “I still consider myself a shy individual, but the team understands that although we are freshman playing in our first varsity season, we do actually know what we are talking about and are here to help; nothing more.”
Lodge agreed whole heartily with her friend. 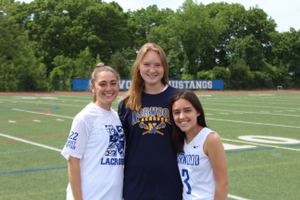 “Yes, we do play year-round, but being a freshman, I didn’t want to say too much and come across as a know it all,” Lodge said. “As the season has gone on, the girls, of all ages, have not only bonded but have come together as a team that has all the pieces to be successful in the future.”

With the team understanding that the two Olivia’s were there to help, they too felt more at ease. Coach Lodge uses his three club players to help demonstrate whatever he is trying to get through to his team.
“Anytime I have a drill to go over I use Caroline and the two Olivia’s to visually show the rest of the team what I am looking for,” Lodge said. “The other girls are not dummies but I feel it makes it easier on them to see what we are doing using the club players.”
Another freshman who has made a big impact with the team is starting goaltender Charlotte McDonald. Although only playing in the Norwood Youth Lacrosse Program for a few years and having lost all of last year, she has shown that she too belongs on this team.
McDonald faced a blistering 35 shots against a very talented Ashland team in which she stopped 20. According to the Coach, making 20 saves in high school lacrosse is an unbelievable feat and she was defiantly getting in the Clockers’ heads as she continued to turn aside their shots. Although the team eventually succumbed to Ashland’s talent, the freshman was perfect in the first quarter stopping all eight shots she faced while her teammates built a 3-0 lead.
Norwood’s junior class is not all that shabby either. Sam Reen, Hope Ford, Maddie Berry, and Reese Barnett hold down the team’s defense while Ally Steeves and CC Venditti patrol the midfield for the Mustangs.
“We are so lucky to have a good defensive core of juniors who have taken control,” Davey said. “As a captain, I rely on them to keep the defense in check. Sam and Hope have done a phenomenal job leading that core.”
Naughton interjected that the team was lucky to have a club player in each part of the field that in turn helps set up the play and keeps things moving in a smooth fashion.
At the time of this writing, Curran was leading the tam with 26 points; sophomore Caroline Forrest had tallied 20 points with Davey (19), Lodge (17) and Naughton (16) right behind her. While the two freshmen have been able to put up points for the Mustangs, one has to recognize they are still young players and have had their share of ups and downs throughout the season.
“You have to remember that they are only freshman playing in their first year on the varsity team and because they are freshman they have struggled at times to be consistent,” the Coach said. “However, the team understands this and during our most competitive game of the season against Norton when the two Olivia’s hooked up to score the sideline erupted. It seems that they have figured it out.”
As the season is quickly coming to an end and the tri-captains will soon be parting ways, the Norwood girl’s lacrosse team seems to be on the path to success.
“The future is bright with this team,” Lodge said. “We have a solid group of sophomores and juniors who have a lot of potential to help this team qualify for the tournament and that’s what we’ll be looking to do.”