By Christopher Tremblay
Norwood High varsity softball pitcher Athena Alexopoulus is playing in her sophomore season for the Mustangs, and although it is her second year in the high school, it is only her first on the field due to the Covid pandemic that shut down sports for about a year. Alexopoulus was all set to join the Mustangs last spring before the pandemic and is now finally getting a chance to play in her first varsity season. 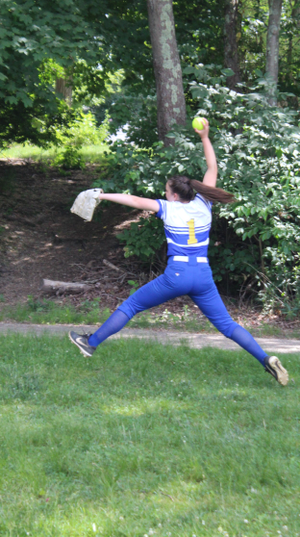 “This is only her first year playing softball for us,” Norwood Coach Carol Savino said.” Losing a whole year at this age makes a big difference in their development, but now that she has some game experience, next year should be a lot better.”

According to Savino, the young hurler is not an overpowering pitcher that records a lot of strikeouts, but she does have a decent drop pitch when it’s on. When the pitch is working, Alexopoulus creates a lot of groundouts. The sophomore also bats leadoff for the team.
“As our leadoff batter she’s hitting around .620,” the Mustang Coach said. “I knew that she could swing the bat, that’s why she is our leadoff hitter.”
The Norwood native began playing t-ball in the fourth grade,  but after a few years her parents though it was a good idea to move her over to softball. Originally, she found the transition to be a little hectic trying to hit and catch a much bigger ball, but she eventually got use to it and now has no issues with the differences.
During her initial years of playing softball, she found herself rotating to just about every position on the field, however, when kids began pitching to one another instead of the coaches, no one wanted to play the position.
“No one wanted to try it, so I decided to take it on,” Alexopoulus said. “At first I didn’t know what I was getting myself, into but soon found that I really liked it. There wasn’t a lot of competition, and you are always involved in most plays in some way.”
It was around eighth grade when she was attending the high school softball clinic when Coach Savino told her it would be a good idea to joining a club team if she was serious about playing high school softball. Soon after Savino’s guidance, hooked up with the Mass Drifters out of Taunton, a team she is still playing for on a regular basis.
The play of club ball is a much faster game in terms of pitching, something that she was not use to. Playing club ball has also helped her transition to high school play.
Entering Norwood High School, Alexopoulus, who also swims and plays soccer for the Mustangs, was really looking forward to her first year on the softball field.  As she prepared and participated in captain’s practices, she and her teammates were gearing up for the season when Covid began circling just before tryouts were to begin. The MIAA originally put the season on hold trying to figure out what was going on while waiting for word from the Governor of the State.
“I was personally upset that the season was suspended, but I held onto hope that we ‘d eventually played as softball is my primary sport,” the sophomore recalled. “I kept practicing my pitching, hitting, and fielding waiting for the day we would get back onto the field and play. Unfortunately, the start dates kept getting pushed back later and later and before you knew it summer was here, and I lost my entire freshman season.
The Norwood freshman was very disappointed with her lost season, but she knew that she just had to let it go and move past it. During the late summer, she did play in some local tournament games for the Mass Drifters, but that too was much different than what she was used to in the past. All the games they did get to play not only had to be local, but they would play the same team over the weekends.
“After getting to play a few games late last summer, I was hoping that we’d have a season this year,” Alexopoulus said. “As restrictions started to become less and less, I was getting excited that we’d have a season and I would be able to show my abilities. Losing that first year was tough so it was very important that we’d have a season this year.”
Coming into her first varsity season, Alexopoulus wanted to get into the circle and pitch to the best of her abilities, even though she was splitting time in the circle with junior Katelyn Flynn. Along with her co-pitcher, she wanted to help the team win and become successful. At the time of this writing, the Mustangs were 7-6. During their seven wins, Norwood had impressively outscored their opponents 72-23, while staying competitive in their six loses, losing four games by a single run and one game each by two and three runs.
As her first season is coming to an end, the sophomore is looking forward to the future with her teammates on the field.
“I want to improve my pitching, hitting, and fielding [playing the outfield when not in the circle] during the off season,” Alexopoulus said. “I believe that we will continue to be competitive throughout the rest of the season and am looking forward to the next two years with this team as we continue to grow and become a better team.”
Getting the chance to play for the high school was a big opportunity this year and most likely having a regular summer season with the Mass Drifters should help Alexopoulus’ game giving her and the Mustangs a chance to not only become competitive once again, but hopefully have a shot at the Tri-Valley League Title and a district championship.